Green Bee Life Founder & CEO, Maria Calabrese has overcome several traumatic life events. While disruptive, these experiences opened her eyes to the cannabis space, for which she is eternally humbled and grateful.

Why We Are Abuzz with Motivation to Help You

Maria grew up in the D.A.R.E. era, when marijuana was dubbed a “gateway drug,” and went on to become a law student wanting to stay on the “right”’ side of the law. As such, she felt both uninformed of the benefits and inherently fearful of weed.

In a catastrophic car accident just one year into her graduate school studies, Maria suffered multiple injuries — including a broken back that led to four major spinal surgeries. And that was only the beginning of 32 years of chronic pain and cyclical prescriptions of debilitating and addictive opioids.

Marijuana was prohibited. So, it was off the table for Maria.

Long-term use of non-steroidal anti-inflammatory medicine (NSAIDs) contributed to significant gastrointestinal health problems for Maria. Only then, did Maria learn that over 100,000 people per year die from GI bleeds related to these types of medicine.

For the Love of Others

All the while, Maria leaned on her animal companion Juanita, a rescue pup from the desert of Mexico. For 17 years, Juanita was there for Maria’s highs and lows. But after a long and blessed life, Juanita herself was suffering from congestive heart failure, loss of appetite, and severe arthritis.

Around this time, two things happened. Prop 64 (an initiative to legalize cannabis) was slated for the California ballot. (Maria voted “Yes.”) And, medical marijuana was recommended to extend Juanita’s life, helping with pain management and appetite.

Despite being for legalization, Maria had a visceral reaction to the idea. Should she give the “deadly” drug she’d been raised to disdain to her soulmate?

With a heavy heart, and despite deep-seated reservations, Maria decided there was nothing she wouldn’t try for her beloved desert mutt. The process was an emotional rollercoaster of doubt, shame, fear, and confusion — from the moment she requested a recommendation to the first time she stepped into a dispensary.

It's Bigger Than Just Us

At the time, she wished that there was a reliable, unbiased source of educational content about cannabis.

Instead, she was met with:

This just caused her even more anxiety. Perhaps you can relate?

My evolution in the cannabis space went from being paranoid, to skeptical, then curious, and now enthusiastic, proud, and informed.

Maria’s journey is a common path for boomers — one of the fastest-growing groups of cannabis users. “When I was in law school,” Maria says, “my favorite quote was “Eve was Framed.” Neither the apple nor the cannabis plant are forbidden, rather God-given and every being’s right.”

Ultimately, cannabis — alongside much love and medical care — extended Juanita’s life for nine more precious months and culminated in a peaceful passing.

After seeing firsthand how it helped her cherished pet, Maria began researching and using cannabis medicinally for her own pain management and health. She learned about the endocannabinoid system and the multitude of benefits that come from plant medicine.

Maria was determined to:

She was, in essence, pollinating Green Bee Life.

The Queen Bee's Got Some Creds 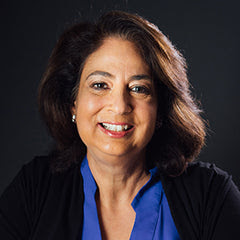 Maria Calabrese, J.D., former CEO/Co-Founder of Griff Entertainment and MC Squared Entertainment, thrives off giving a voice to the cannabis industry and community, cultivators, educators, advocates and brand innovators while helping them get the exposure they deserve to unleash the full potential of cannabis as a wellness solution. Her education and experience include marketing, law, cross-cultural communications, traditional TV/film management and production, branding, advocacy and mentorship.  Collaborating with raw talent to produce groundbreaking work is what has kept her deeply seated in the entertainment industry for over twenty years. During this massive shift from traditional television to new media, her focus has remained on the empowerment, management, and profitability of content creators and cannabis educators and brands across all mediums. Like traditional broadcasting, she believes new content does not need to just compete for eyeballs, but can say something meaningful and be commercially viable at the same time.